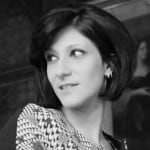 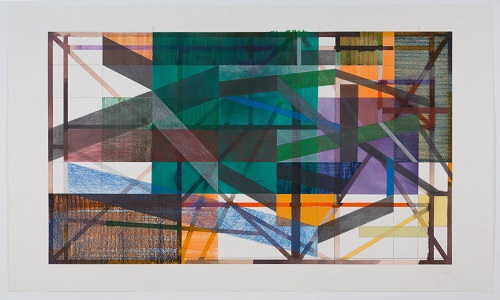 Von Bartha, Basel are pleased to announce a solo exhibition of new works from British artist Andrew Bick, running from 14 April – 26 May 2018, and titled gate/grid/tree/(notes/on/concrete). One of the leading contemporary painters working in response to the tradition of constructivist art, Bick’s technically complex and layered pieces merge drawing and painting, line and plane, transparency and opacity, to form a complex whole.

The exhibition takes two sources of inspiration as a starting point: the German artist Paul Klee’s lecture diagrams, from The Nature of Nature (creating a tree structure from the number sequence 1:3:5:7:9), and the work of the American concrete poet Robert Lax, (1915-2000), whom Bick corresponded with. The resulting mix of influences and allusions generates repetitions of grid-like forms across the gallery space.

For ten years, Bick has been working with two singular grid structures as a basis for all his drawings and paintings, derived from an initial copy of a painting in 2008. This digitised grid format, consisting mainly of triangular outlines, he then projects onto his canvas. Bick transfers the lines onto the work’s surface, keeping some elements and editing out others. His practice is thus one of constant evolution, with each new work existing as a variation of previous versions. Finally, by incorporating painterly elements into the multi-layered works, the resulting pieces generate interplay between gesture and geometry, rational and irrational processes. This method of reinvention – integral to Bick’s practice – references key influences within the abstract and concrete movements, in particular Klee’s concretised version of nature and Lax’s contemplation of the world through an ordered sequence of words.

A central work at von Bartha, gate/grid/tree, revisits a motif previously included in Bick’s solo exhibition at Haus Konstruktiv (2017), and the point of inspiration for a new public commission by the artist launching in Piccadilly, London, March 2018. At von Bartha, the repeated structure – a lattice of constructivist shapes referencing both nature and architecture – is presented as “wallpaper”, lining the gallery’s entrance space. Opposite this, Bick echoes his construction in a tilted line-based wall painting: a part-reflection which serves as both connection, and delineation, of the exhibition’s contrasting sections. A shift in pace and mood is noticeable in a set of „slow-time paintings” hung as a group at the back of the gallery. These works have been re-painted over the past five to ten years, covering or scraping off versions that Bick feels could take further interrogation. They reference Lax’s concept of a contemplative life, one where moving slowly, speaking slowly and thinking slowly becomes a quiet form of resistance against a world based in hasty forms of engagement. Bick’s new series of paintings are thus simultaneously some of the oldest and newest works in the exhibition.

About Andrew Bick
Andrew Bick (born 1963, Cheltenham) studied at Cheltenham College of Art, the University of Reading as well as the Chelsea School of Art and Design in London.

In March 2018, Bick presents a public commission by Modus Operandi in London’s Princes Arcade and he has also been commissioned to design a gender neutral pocket square for Drakes Menswear.